Thank you for your patience while we retrieve your images.

Since the 19th century, Basque nationalism has demanded the right of self-determination or independence, which is supported by a majority of the population. This, along with a centralist imposition from the Spanish government, has created high amounts of political tension in the region. The most important consequence of this tension was the creation of ETA (an acronym for Euskadi Ta Askatasuna; "Basque Homeland and Freedom") in 1959. During its more than five decades of existence, ETA has been held responsible for killing more than 800 people. On October 2011, ETA announced a "definitive cessation of its armed activity".


Sadly, politics, or more specifically political violence, is the main reason I could have a job as a photographer in the Basque Country. If it wasn't for politics I would have probably never been a photographer. Happily the main armed group in Basque Country, ETA, hasn't carried out any attack since 2011 and the tension has been reduced to almost zero. Time to heal the wounds.


From 1997 to 2006 I covered almost all major political events in Basque Country, mainly in the eastern provinces. Riots, demonstrations, bombings, shootings and funerals became a weekly routine during that period. I was injured a few times, threatened, pointed at with all kind of weapons and even offered a job as informant for the Spanish secret service! HA! 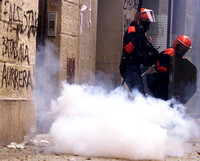 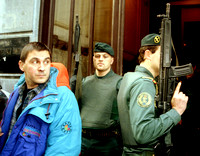