Thank you for your patience while we retrieve your images.

Zugarramurdi is a small town of around 200 inhabitants, deep in the mountains of Navarra, near the political border with France.

The town was the center of a witch-hunt by the Spanish Inquisition in the 15th century. In 1610, 40 women were here accused of witchcraft and 12 of them were sentenced to burn at the stake. The cave located on the outskirts of the village is know to be the place where those accused of whitchcraft used to gather and celebrate their rituals, known as Akelarres.

In 1997 I started covering the festival held in the cave as a tribute to those witches and to celebrate the summer solstice. This was not the typical festival. It wasn't advertised in media and most information you could get about it was mouth to mouth. It used to be celebrated in the Saturday closest to June 21, the summer solstice, but you never knew if you were going on the correct Saturday until you were there!

The festival used to happen very late in this remote location. Rivers of alcohol, drugs of all kind and fights became too common and at one point the organizers decided to halt the rave. Attending revelers would usually sleep at the site, in the fields, inside cars or wherever they collapse.

I was the weird creature leaving half way through the night, driving back home, developing the film in the dark room and sending the pictures by the time the sun was already high in the sky.

The biggest challenge? To move around a dark place with irregular surface trying to keep your precious expensive cameras from the very drunk, very high people. And shooting in very challenging light conditions avoiding as much as possible using the flash. 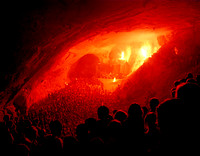 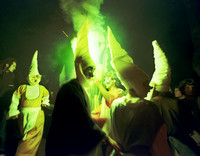 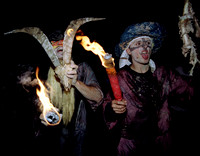 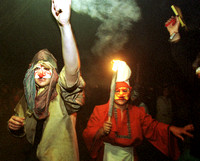